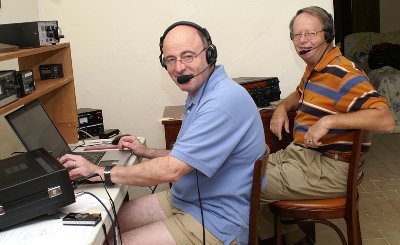 We went out to VP9 hoping that 15 meters might be open a bit so that we could escape being in a 20 meter “snake pit” during daylight hours.  We’d say
that 15 opened--1169 Q’s, in 61 countries!  Ten was a real nice surprise for this time in the sunspot cycle giving us 23 countries and 102 QSO.  Seventy of
those Q’s came in a Friday evening opening around 0130Z into zones 4 and 5; most of those 10M signals were as solid as those on a local FM repeater.

We never felt challenged by the exciter-level power limit in VP9.  We could quickly establish a run when we switched bands.  Because the rates were so good
and running was so easy, we might not have hunted mult’s enough.  Most of the mults in our log called us.  A second radio hunting mults (allowed in M/S)
could have contributed more.  However, that would involve bringing a second computer to network to the run station, a second transceiver, and an antenna
tuner.  Because this was our first joint contest DXpedition we opted to keep the packing simple and light with one radio and one laptop.

Being only 700 miles east of the US meant that signal from the States, Canada and Mexico tended to be LOUD!  Regardless  of the direction of our beam, they pounded in.  If  we went below the US phone bands looking for EU, the VE’s still pounded in off the side of the beam.  When we “played to our strength”  by turning the Yagi west, we had great rates on 20 and 15!

A comment about the antennas.  Although some were low, relative to the ground, they were 70’ to 100’ above the nearby (150 yards) Atlantic Ocean on a
northwest sloping site.  Nothing like location and terrain to give signals a boost!  We had a minor mechanical problem with our antenna matching unit which
kept us off 80 and 160 on Friday evening.  On Saturday, we managed a repair (NOTE:  Always, always  take a Leatherman tool in your check bag!) and managed 450+ Q’s on the low bands Saturday night.  Our apologies to those we missed Friday.

Coming from the Eastern PA (K3YD, writing) I’m used to crisp Fall temperatures, and leaves on the ground for CQWW-SSB.  We spent the entire
contest period in T-shirt and shorts.  The daytime temps were about 80 and sunny; the night-time “cooled down” to about 70.  Of course, W3TB who lives
near Tampa didn’t think this weather was at all unusual.  (again ‘YD)  I hand carried my ‘756Pro in a small, hard sided suitcase, padded with clothing
and foam rubber.  I did have to remove the radio for TSA’s  X-ray screening, but was never questioned about it!  I’m thinking smaller, lighter radio for
my next trip, though.  By the time I got home Monday night, I think both of my arms were stretched an inch longer!

Our thanks to Ed and his wonderful family for allowing us to operate from their home on the warm, sunny island of Bermuda.  Thanks, also, Ed for all your help
in getting our Bermuda operating permit and with showing us around Bermuda.  We can’t wait to return.